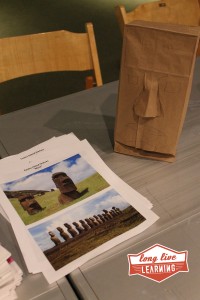 We recently attended the Atlanta History Center’s homeschool days about colonial life (in September) and Strange History (in October). The events were awesome! (I have written a detailed review with all you need to “know before you go,” at Expedition Mom. However, it is in the lineup for release.) There has been an ongoing, interactive theme running through the events. For the colonial history, the kids chose a period job and used their skills and goods to trade with other kids throughout the event. During the Strange History event, they were given sets of characteristics to identify their fellow students as witches, werewolves, possessed, etc and told to bring the accused to trial where their fate would be handed down! There was a colonial manners class and a tea party, a group session that had the kids brainstorming the reasons behind the American Revolution. At the Strange History event, the kids learned the stories behind common superstitions and raced through an obstacle course avoiding black cats, broken mirrors and ladders. The boys especially loved the “Wormhole to Weirdness,” in which, they played the role of time travelers exploring the world’s mysterious sites such as Stonehenge and The Pyramids. At the end, the find out if they made it back to their own time or got lost in history! We learned about some of the greatest hoaxes and their perpetrators, even listening to some clips from the infamous “War of the Worlds,” broadcast. On both days, the boys created a variety of crafts and really enjoyed themselves. For $8.50 (nonmembers) or $6.50 9 (members), these events celebrating and bringing history to life cannot be matched. They are held once a month and my only complaint is, “I wish they could do it once a week!”

One part of the event, that really captured the interest of my oldest son, was the “witch hunt.” We were given a sheet describing some of history’s most feared and fabled peoples. We were on the lookout, among other homeschoolers and parents; for witches, vampires, werewolves, and people possessed by the devil. The boys kept lookout for folks with green eyes and red hair (witches), holes in their clothes and aggressive behavior (werewolves), or shy people (possessed by the devil). We decided to take Sean to trial for being a werewolf. After attempting, in vain, to defend himself against the accusations, he was found guilty. The cure for being a werewolf and his fate? He was exercised to death! He came home and immediately made a detailed review of our trip through Strange History.

The next Homeschool Day at The Atlanta History Center is probably going to be my youngest’s favorite. It’s about Thanksgiving Traditions. Thanksgiving just happens to be my, ‘little bottomless pit’s,’ favorite holiday. We hope we’ll see you there! It’s really not to be missed. Thursday, November 8, 2012 from 1 PM to 4 PM. The cost is $8.50, for non-members and parents must also pay. For members, the cost is $6.50 and parents are free. You can find the complete calendar of Homeschool Days, here, on the Atlanta History Center website.

Now, to get your fill of Strange History, check out my resources for The Salem Witchcraft Trials!