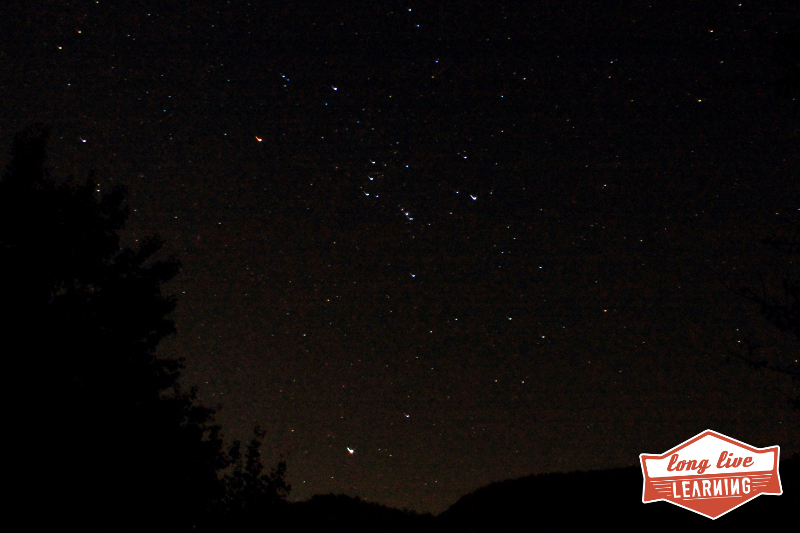 My Nature Journal, for December, will concentrate on the Geminid Meteor Shower and the Winter Solstice.

Winter Solstice: December 21, 2012
A couple ways to enjoy the winter solstice.
– Use a page in your Nature Journal to record the sunrise & sunset times leading up to the solstice.. then, do the same thing for several weeks after the solstice.
– Make an attempt to witness several sunrises or sunsets during this time. Try to include different methods of recording info about them. You can, of course, record data such as the sunrise/sunset times. You can identify the dawn or evening clouds using their scientific names (cumulus, cirrus, stratus, etc.) You can also be very descriptive.. using personal experience to record the colors you see, in the sky, during the sunrise/sunset.
– If you don’t already understand what is meant by “Winter Solstice,” you can research a bit to find out exactly what this means and why the seasons change when they do.
– This is the time of year, around here, when the nights are the longest and the days are shortest. Spend a bit of time in the dark and be observant. Record sounds and write about how the dark silhouettes and shadows leave a lot to the imagination. Are you more comfortable having light? Do you prefer the stealthiness of using no flashlight or do you like to have an illuminated path? 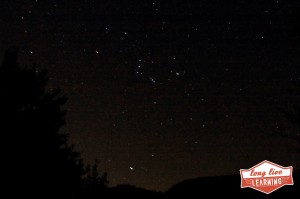 Geminid Meteor Shower!
(click image at left for better view of beautiful stars)
The Geminid Meteor Shower occurs right around December 12-14. This is one of the best meteor showers of the year, according to meteorshowersonline.com. In 2012, it’s a new moon, which should help with greater visibility.  So, I thought it would be a good topic to focus on for this month’s Nature Journal.  Watch meteor showers in the very early morning hours. 🙂

This focus allows me to introduce you to one of the coolest guys ever, Eugene Shoemaker. You may know him from the documentaries about Asteroids and Meteors. He is one awesome dude. He’s also the only person to be “buried on the moon.” I highly recommend watching the, “National Geographic Asteroids!” documentary (available on Netflix) that features the work of this totally awesome geologist. He became a geologist because he thought, that’s the kind of scientist that they’ll send to study the moon. He really wanted to go to the moon! He was right. He was chosen to be an astronaut for the first mission to the moon.  Unfortunately, he was unable to complete the mission because of a medical condition. So, he stayed on Earth and studied meteor impacts and mapped the orbits of asteroids and comets in space.

View the Geminids Meteor Shower, if possible, and record how many meteors you see. Was it exciting? What did you feel like when you witnessed meteors? What did they look like? You can also spend some time identifying constellations and specific stars, using a star wheel. Click here to craft your own star wheel. Or use the Google Star Map App available free from Google Play Store.

1 – Lay at least an inch of flour into the tray. You don’t want to make it too compressed, so perhaps use a sieve. Mix it up to get some air in there. 2 – Sieve some cocoa powder onto the surface of the flour. This will allow you to see what’s happening. The cocoa will act like the topsoil on the earth.  The malteser ended up deep down into the flour, and the flour has been thrown up on top, covering the cocoa powder in a circle of about 5cm in diameter. When you drop the malteser, it’s gaining kinetic energy as it falls towards the earth, just as a meteorite would do. When it actually hits, all that energy has got to go somewhere. In a real meteorite some of that would become sound, and heat (which melts things), but lots of it just goes into throwing stuff around. So why is it that the earth from underneath the meteor gets thrown up to the edge of the crater?Well the cocoa, or the earth’s surface, will get thrown around as well. But so much more of the deep stuff gets thrown up that it will cover the surface around the edge of the crater. This will also tend to lift the edge of the crater, which is why they tend to have those high rims. So what about a meteor that strikes on an angle?Well now all the flour that is thrown up by the malteser meteor spreads out further, and only in the direction which the meteor was flying in.Because the malteser has a lot of momentum in one direction, it will tend to transfer that momentum into the earth which is being thrown up. How is our experiment similar to an actual meteor hitting the earth?It’s a very similar set up. A meteor hitting the earth will tend to vaporise things and throw them around. Most of it will be within a kilometre or two but some of it can spread thousands of miles up into the stratosphere. Normally craters are circular, because the size of the meteorite compared to the size of the crater is tiny. Meteors fly through our atmosphere at around Mach 25 (25 times faster than the speed of sound – about 20 thousand miles per hour) which means they have an immense amount of energy. When they hit the ground it’s like a nuclear bomb going off. A famous meteor crater in Arizona was created when a 50 meter across Asteroid hit the earth. The crater it left behind is about 1.2 kms across. That’s like 2.2 million tonnes of TNT going off all at once!