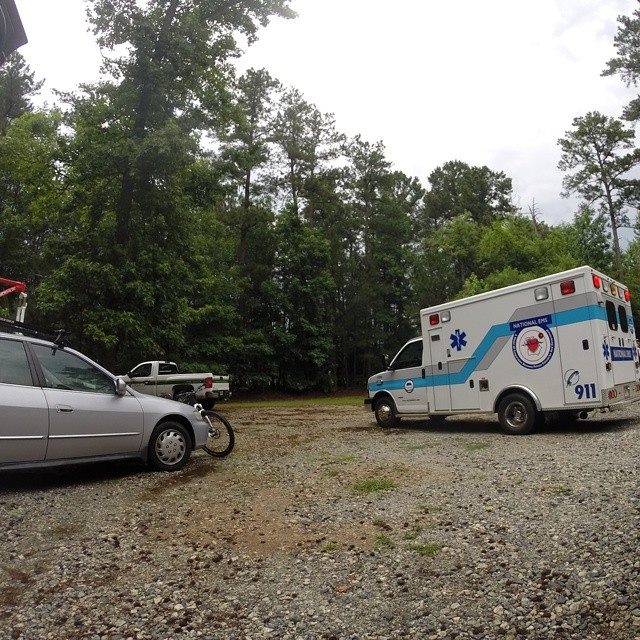 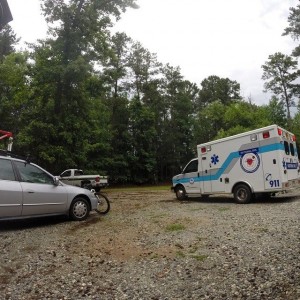 I sat in the passenger seat and let the scene unfold before me. After rushing to the ranger station to fetch someone with a 4WD vehicle and activating 911, my partner returned and immediately hit the trail to assist the other bikers.

Their bike ride had ended in a scary medical emergency. But, ours was the one doomed from the start. We had gotten a late start and once we arrived, my partner had to shop the nearest Wal-Mart to purchase a replacement for one lousy pedal on my son’s bike. Thirty minutes after we first arrived, we were finally hitting this trail that we’d driven an hour and a half to ride. That’s when the bottom fell out of a storm that had crept up like a snake in the grass–ready to strike and ruin someone’s day.

Many mountain bike trails are closed during and after rain. But, halfway through the first trail, our only choice was to complete it one way or another. My normally sweet & gentle younger son happens to be a thrill-seeking speed demon, on the trail. My partner kept pace with him as he cheerfully pedaled along in the rain, fueled by the excitement of his back tire slipping and sliding in the mud of the trail. My normally aggressive older son is more cautious and nervous on the trail. His unfamiliarity with the trail, coupled with insecurity brought on by the weather conditions, brought his ride to a complete halt. He hopped off the bike and opted to push it the rest of the way. So, that’s where I was. Plodding along with him, pushing my bike through the mud–A wild cat, soaked to the bone and seething.

The way I figure it, we could have been to the end of this trail before it ever really got wet. If my older son hadn’t spent so much time stopping to complain about this and that and everything, we could have made it back to the car and been packing up before the heavier shower began. If he hadn’t stopped to walk the bike, at the first drop of rain, we would have made it out of there before being thoroughly drenched.

I walked along, my mind riding the fence between the disappointment of driving an hour and a half to walk my bike through the rain and the fun of being caught out in the rain. Arriving back at the trailhead where we began this ill-fated ride, I dumped my bike at the back of the Envoy, grabbed a towel to cover the seat in a feeble attempt to protect it from the muddy sopping-wet sponge I’d become, and sat down to remove my water-logged shoes.

I was tired. I was tired of struggling every time I wanted to do something fun or different or new. There always seems to be this dark cloud I have to walk through to do anything and I was tired. Can one thing just be simple? Am I doomed to having to run through this seemingly endless checklist of reassuring others, calming their insecurities, hand-holding, candy-coating, arguing, soothing, pushing and pulling to do anything I want to do in life?

I removed my socks and had my attentive younger son throw my muddy footwear in the back of the Envoy when a man, dressed in the tell-tale form-fitting clothes of a biker, came around in a panic. “My friend is having a stroke back there on the trail..” he began, “… could you guys just wait here for me and if I don’t come back…”

My partner listened to the biker’s pleas, and informed the man that he could do better than just waiting around–He’s a former paramedic. What fantastic luck for this panic-stricken biker and his pal, that not only do we come equipped with a paramedic–But, also a cautious, nervous little boy that slowed us down enough to still be here waiting to help with this emergency. 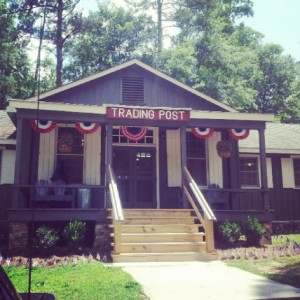 Pete, my partner, sprang into action. As the biker went to sit with his friend, we drove the short distance to the Ranger Station to fetch someone with a 4WD vehicle and a key to the gate that blocked the access road. The ranger was a new ranger to this park who had only arrived within the month and seemed unprepared for this particular emergency, taking their instructions from this random guy who’d come to inform them of the situation. No sooner had we returned to the trailhead, than Pete was unpacking his bike from the rack and hightailing it down the trail to assist the ill biker.

Pete had time to drive from the ranger station back to the trailhead, unpack his bike, pedal out to meet the emergency on the trail and do an initial assessment before the park ranger arrived, in the 4WD truck with keys to the gate. The park ranger was followed by an ambulance that was forced to wait in the parking lot, knowing the ambulance couldn’t make the soggy access road.

And…. within that short period of time, everything became ok. The biker was being treated. The feelings of doom and gloom and struggling dissipated like the summer afternoon rain shower that had drenched us. Because that’s what feelings do. They come and go like clouds in the sky. They were replaced with an understanding that if we had been 5 minutes faster to make it off the trail, that panic-stricken biker, his friend & the unprepared ranger would have been on their own–with no plan of action.

Which brings me to two important things you should always have with you on the trail with your family:

1. Have an emergency action plan and be ready to put the wheels in motion, even when others around you are panicked.

When we left, the ill biker was being treated by the ambulance crew and as far as I know, is ok.