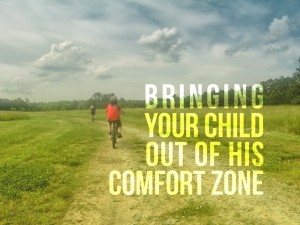 My Crazy Horse is a nature boy. Put him in the forest, or barefoot on the banks of a creek, and he’s at ease. He’s at home exploring the minute details of the environment. He’ll gently handle any lizard, frog, or amphibian that finds itself in his path. He’ll sneak up next to snakes and turtles for a closer look. He’s in his comfort zone walking along through nature. Near the end of the post, I’ve provided some tips for helping a person out of their comfort zone.

But, put him on a bike, and it’s like you’re dangling him over a cliff. He knows how to ride a bike. He’s pedaled alongside his family on many rides down the Silver Comet Trail or around the neighborhood. But, he’s not comfortable. He’s so uncomfortable that he’s opted out of all of our recent mountain biking rides. His younger brother, J Bear, has been mountain biking with me since the beginning of April. However, we’ve left nature boy at home, unable to convince him that it’s worth a try. Until today.

I can’t tell you how ecstatically proud I am of my sweet Crazy Horse for stepping WAY out of his comfort zone and joining us on a mountain bike ride, today. It wasn’t easy and I am just blown away by his determination and the courage that it took him to really immerse himself in the experience and have a breakthrough…

Let me tell you, I am not a pushy person. I’m definitely not a salesperson. I take my primary role, as facilitator, very seriously. I am here to provide them with opportunities, not force them to participate when they have no desire. However, my own newly discovered passion for mountain biking persisted in making attempts to gently convince Crazy Horse to join us. At the very least, I wanted him to come along, ride a trail and make a decision after giving it a shot.

I spent the past two months inviting him along on nearly every trail ride I did. I would come home and tell him details about our ride and the trail we rode, in hopes that he would imagine it as a possibility for himself. He opted out, every time, dead set against getting on a bike.

Today, on a whim, I invited him on a mountain bike trail ride followed by dining out. Mountain biking makes us very hungry and often, after a ride, we’ll stop and get something to eat. At first, he took me up on the offer – for dinner, not biking. But, after a short session of having different members of his family describe the entrance trail as, “easy, flat, and fun,” he decided to give it a try.

He hasn’t been on a bike in quite a while and he was riding a different bike than he usually does. He began as if he had completely forgotten how to ride a bike at all. It just makes him so nervous and anxious. He’s never had a bad spill, so I’m not really sure where the fear comes from. He would pedal half a rotation and plant both feet back on the ground, never getting enough force to propel himself forward. I simply rode alongside him as slowly as I could, while Pete & J Bear zoomed ahead down the trail. He kept trying, and almost in tears, explained to me that it wasn’t him that was putting his feet down – it was his brain making him do it because his brain felt like he was going to fall. “That’s fine. I understand. If you keep trying, you’ll show your brain that it’s ok and it will stop doing that.”

I watched him try and try until he was pedaling along at a decent speed that could keep his balance. Nervously, he laughed at the quacking sounds that old bike started making as he pedaled along. He rode that bike right out of his comfort zone and when asked if he wanted to try it again, he replied with a, “yes.”

We celebrated with a dinner at his favorite restaurant, Sweet Tomatoes. He likes Sweet Tomatoes because he’s a nature boy & prefers raw vegetables to cooked food. He made me a very proud momma, today. It’s very special that he was willing to move out of his comfort zone & give this a try for the company of his family.

Some tips on helping your child step out of their comfort zone.

I think, first and foremost, you must know your child very well and approach according to their personality. Crazy Horse is extremely stubborn. Like most wild horses, he doesn’t like to be pushed or having someone ride his ass about something. So, my approach to the situation has to be very delicate… I gently nudge him by inviting him along on all the rides, but accepting that he’s not ready to go yet. I take opportunities to inform him of what to expect… Always giving him a run down of our ride when we return. Telling him details about the trails. Even showing him a photo or video of the ride and pointing out the parts I think he would enjoy.

Next, include something you know they’ll enjoy. Even if they fear one activity will be a disappointment, they still have something else to look forward to that they know they’ll like. My choice was his favorite restaurant. It makes sense because I already know our biking is going to make us hungry and we haven’t been to his fave place in a while. So, I combined the two to provide something he could enjoy even if the mountain biking was a total failure.

They set the pace. Whatever you’re doing, with the cautious or fearful, they have to set the pace. You’re the sidekick. They’re the hero conquering the world. Move at their pace, even if it is excruciatingly slow. We need to be gentle, or that turtle we so desperately want to see is going to retreat back into their shell.

Provide opportunities to take breaks and do something they do enjoy. For example, about half way down the trail, we stopped to allow Crazy Horse to enjoy the honeysuckle on the side of the trail. The confidence that he feels doing something he enjoys will carry over to this challenging new activity. Even though it’s slow going, take breaks. This is hard work for someone who’s not only learning something new or trying a new experience but also breaking the fear barrier or busting out of a comfort zone. That takes the activity to an entirely new level of mental focus.

Has your child overcome a fear or broken out of their comfort zone, lately?

One thought on “Bringing your child out of his comfort zone”