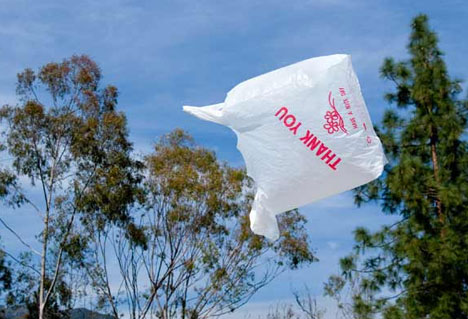 In 1965, a Swedish company called Celloplast acquired patents for the most commonly seen plastic shopping bag design (Petru, 2014). Essentially, a tube of plastic is sealed on one end, and holes are punched out to form handles on the open end providing a convenient way to carry items. Nicknamed, “t-shirt bag,” for its shapely similarity to undershirts, the seemingly flimsy bags carry a thousand times their own weight, protect items from water damage, and cost less than their paper predecessor (Petru, 2014). While there are many types of plastic bags, the typical shopping bag is generally made of high-density polyethylene. Discovered in 1952, polyethylene is formed from fossil fuels, either modifying natural gas or as a byproduct of refining crude oil (Lepoutre, n.d.). Known to the recycling system as No. 2 plastic, popular high-density polyethylene exhibits properties that boost its versatility. The material is malleable, lightweight, strong, as well as mildew-resistant (Plastics Make It Possible, 2015).

Major grocery chains introduced single-use plastic shopping bags in the early 1980s. Due to versatility and lower cost, the bags quickly rose in popularity mostly replacing paper bags by the 1990s. Today, the numbers prove that plastic bags play a significant role in the daily lives of millions of people. Americans use approximately 102.1 billion plastic bags per year (Clean Air Council, n.d.). That’s well over 300 bags per person. They are a familiar, everyday item used by the majority of shoppers in the United States. Widespread popularity explains why plastic bags were among the most common waste found during the Ocean Conservancy’s International Coastal Cleanup of 2009 (Clean Air Council, n.d.), and a major contributor to the 15 million square kilometers of, “plastic soup,” amassing in the Pacific Ocean (Summers, 2012).

Single-use plastic shopping bags are a good representation of the complex relationships that exist between people, pollution, and the environment. First, the polyethylene used to make the bags is produced using natural gas and petroleum, both of which lead to various forms of pollution. Next, we have the long lifespan of polyethylene and its resistance to biodegrading. Because microorganisms do not recognize the man-made polymer as food, they do not break it down the way they do newspapers or banana peels (Lapidos, 2007). This ensures the material remains in the environment and landfills for decades or centuries after it is discarded. While polyethelyne resists the natural process of biodegrading, it photodegrades releasing greenhouse gasses associated with climate change. Prolonged exposure to the ultraviolet radiation in sunlight breaks the polyethylene into increasingly smaller fragments called microplastics. Birds and other wildlife often mistake plastic for food. Plastic bags themselves resemble a typical jellyfish meal for sea turtles. Even tiny microplastics enter the food chain as they are consumed by earthworms and zooplankton. One study estimates that more than half of Earth’s sea turtles and nearly all the world’s seabirds have ingested plastic (Feltman, 2015). The plastic may block or pierce intestines, cause starvation, and expose the animals to toxic chemicals. In addition to posing direct and potentially fatal risks for wildlife, questions have surfaced concerning the potential for plastics to introduce bioaccumulative and toxic substances to the food chain (Seltenrich, 2015). Undesirable toxins are sorbed by plastics, and then accumulate as they climb the trophic levels, eventually reaching humans.

Plastic shopping bags impact communities in surprising ways such as exacerbating flood conditions, contributing to urban blight, and racking up enormous cleanup costs. Many nations and cities across the globe have already taken steps to ban them. The results speak volumes about the improved quality of life for individuals and populations. Bangladesh first banned the thin, plastic shopping bags in 2002 after the bags were discovered clogging drainage systems during damaging floods (Oyanga-Omara, 2013). Austin, Texas banned single-use plastic bags in 2013. Two years later, neighborhoods have reduced visible litter and property owners are seeing less negative impact on their property values (McGee, 2015). Equinox Center, a California-based research organization, claims that reducing plastic bags saves San Diego over $150,000 in annual clean-up costs (Kato, 2014). All of these things reveal the truth about the inconvenience of plastic bags. They offer the illusion of getting something for free or being less expensive for businesses. The reality is that there are greater expenses involved with continuing to produce, use, and litter the world with plastic bags.

The ubiquity of plastic shopping bags makes them a good candidate for ambassadorship. Except that each one represents human vices, ignorance, wastefulness, and irresponsibility. Humans built a multi-million dollar industry around this unnecessary, inconvenient item that exists solely to relieve us from the aggravation of remembering and carrying reusable bags or baskets. Faced with the threats of placing fines on the bags or banning them altogether, people rush to their defense with absurd arguments that ignore crucial details and detract from the significance of single-use plastic bags. For example, one argument claims reusable bags must be used over 100 times before we see any environmental benefit (Minter, 2015). While that may be true regarding the carbon footprint necessary to produce the bags, it ignores a few facts. First, using the bag a hundred times is not the monumental task portrayed in the argument. It’s easily accomplished in less than two years by shopping once or twice a week. Second, using the reusable bag over a hundred times prevents an equal number of single-use plastic bags from being discarded in landfills or as litter. Another insidious argument claims that attempting to reduce plastic bags is an unimportant environmental concern when compared with other major issues (Smoucha, 2011). The scourge of plastic bags should not be ignored and allowed to continue until it becomes a critical issue. The fate of plastic bags is sealed as people witness their damaging impact and enact bans around the world.

Lepoutre, P. (n.d.). The manufacture of polyethylene. Retrieved from: http://nzic.org.nz/ChemProcesses/polymers/10J.pdf

Minter, A. (2015, August 18). Plastic bag ban is no sure bet for environment. Retrieved from: http://www.chicagotribune.com/news/opinion/commentary/ct-plastic-bag-ban-environment-20150818-story.html

2 thoughts on “The Life and Times of Plastic Bags”