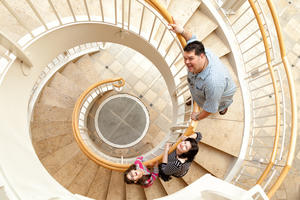 I crawled through a life-size model of a blue whale’s heart, today. My two sons and I fit snugly inside the monstrous replica heart and listened to the deep bellows of the biggest animal to ever live on planet Earth.

Unfortunately, I don’t have photos to share due to the, “No Photography,” rule of the exhibit. But, toward the end of relating my experience, I will share a website whose author was lucky enough to capture some scenes from the museum’s homeschool day.

This exhibit covered a tremendous amount of evolutionary time and human research of these magnificent animals. It would be fairly difficult to give a concise, yet detailed, summary and include all of the wonderful material and interactions.  I can, however, cover some of the interesting inclusions in the exhibit.

We were first presented with a detailed history of the evolution of whales complete with a visual fossil record of the awesome transformation. You see, whales began a long time ago as wolf-sized creatures who walked land. It’s difficult to comprehend the amount of time to pass between those days and the present. The visual aides, skeletons and videos, well documented the whale’s journey in a way my sons could appreciate and understand.

As we proceeded, we found ourselves standing in front of a floor to ceiling mural with images of all the different species of whales presented to scale. The images were grouped according to their shared similarities and introduces visitors to the concept of taxonomy.

As we continued wandering through this whale of an exhibit, we encountered several overwhelmingly large skeletons of whales; one of which, we later learned, had beached itself after ingesting plastic garbage it had mistaken for food. There were also “touch-encouraged,” examples of whale teeth, ribs and vertabra that truly gave us all a better impression of just how large these creatures can be.

One of the coolest interactive parts of the exhibit was the Sound Chamber. Inside this cozy nook, we were able to experience the wide range of frequencies that different types of whales use to communicate with one another. We were definitely mesmerized by the sounds of these animals as they communicated with family, hunted in packs or used echolocation to detect food sources. Whales have a surprisingly awesome sense of rhythm and it’s been discovered that they, “speak,” with accents – just like humans who live in different parts of the world.

We were also served a heaping helping of better understanding the threats and dangers these whales face from a variety of sources, including humans. It really opened our eyes to be shown the small amount of plastic it takes to bring down these massive creatures. A hard lesson to learn. But, now we can focus on trying to reduce our own use of these plastics. We were also able to learn how volunteers, researchers and scientists help these beached creatures and get them safely back into the ocean if possible.

The boys received a nice dose of geography with the “Georgia Connection,” which displayed information about Right Whales off the coast of Georgia.. even including Cumberland Island which we recently visited. More geography was covered by the maps of New Zealand which recorded the locations of whale beachings.

Toward the end of the exhibit, we find ourselves immersed in Maori culture. We were able to listen to several of the Maori legends involving whales and view a beautiful collection of decorated Maori artifacts.

I intend to elaborate with some links to related educational material on the internet with another post in the near future. So, keep a look out for it! I hope you will visit Fernbank’s Whales exhibit and take away as much appreciation for these creatures and the Maori people as we did. Now, for some photos…… check out Kathy’s Cluttered Mind for a review of Homeschool Day.