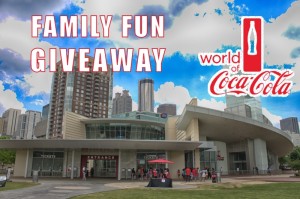 We visited the World of Coca Cola for a complimentary Summer Blogger Kickoff back at the end of May. It was our first visit to World of Coca Cola and won’t be our last. In addition to their usual exhibits and programs, they’re showing a film, “Moments of Happiness,” that seemed to be entirely shot from a GoPro camera. I found that pretty interesting..  and I really enjoyed the film. They’ve also released an iphone app to download & enhance your visit. It includes fun facts throughout the exhibits & some silly photo ops.

Yes, my sons enjoyed the tasting room.. My youngest whirled from one drinking station to the next trying every flavor of Fanta in existence. And, I won’t spoil the surprise. But, my oldest discovered at least one of the beverages is ..quite intriguing. *ahem* Ok, that’s a nice way to say blech! Don’t worry though, because even if you do stumble upon that unfortunate cola, there is no shortage of great tasting sodas to wash it out of your mouth. You’ll leave with a fancy old fashioned glass bottle coke & a smile on your face.

My favorite portion of the self-guided tour was “The Vault.” I even made a little old time silent movie about searching for the secret formula!

Giveaway Time!
I’m going to increase your individual chances of winning & give a lil love to some wonderful bloggers I’ve met through these events. The more bloggers (in this list) that you follow on Twitter or Facebook, the more chances you have of winning the Family Fun Pack of Four Tickets to World of Coca Cola. Ready.. Set… Go!

One thought on “Inside the Vault at World of Coca Cola + Family 4 Pack Admission Giveaway!”