We’ve made a habit of hiking every Wednesday. We’ve gotten so good at it that I even coined a hashtag to connect our #HikeOnHumpDay with social circles and other outdoor families. Wouldn’t you know that the second Wednesday of using the new descriptive hashtag would be fraught with difficulties? Of course, life. I know your patterns well and I come prepared – like a boy scout, only better because I’m their mom. 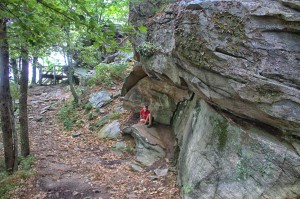 The usual challenges of leaving the house three days in a row pop up like summer thunderstorms. Crazy Horse, caught up in a video game, doesn’t want to leave, yet. I have depleted the supply of go-food and can depend on J Bear’s relentless appetite sneaking up on the trail with us. I’ve been doing this mom thing for over a decade, y’all. At this point, it takes only a few moments to convince Crazy Horse that our outing will be worth his while and decide to stop and grab a bite to eat on the way.

There’s also the nagging ache from my ankle. But, if I can get both the boys in the car – I’m not going to let an ankle stop me. I actually stopped and bought some padded socks that surprisingly made a big difference.

We’ve hiked six mountain tops since April and today we would add our seventh, Fort Mountain. The drive from home is about an hour and a half and hiking this mountain proved a lofty goal as Crazy Horse declared he had a headache and began vomiting in a bag as we rolled down the highway.

It’s OK, y’all. I got this. We stopped by a convenience store and grabbed a ginger ale to calm Crazy Horse’s stomach. I don’t know if it really helps or it’s a placebo effect for him. But, I also don’t really care. It works. He instantly perked up, ate a bite of food and I provided some motrin from our traveling medicine collection.

Whew. Wait, somehow I have injured my shoulder just sitting here in the dog gone passenger seat and it is seriously irritating me.

At some point, during all this, I put my camera battery in the power inverter and plugged it into the car’s power outlet to charge. Yes, everyone should have a power inverter that provides a power source from the car outlet to traditional power plugs. It’s one of the most handy gadgets in my arsenal of awesome things to have in the car.

The numbers on the clock read 4:50pm when we pulled up at the visitors center of Fort Mountain State Park. With ten minutes til closing, we arrived just in time to violate the restrooms and grab a trail map.

Finally, at the trailhead, we grabbed our gear – the hip pack that holds my Canon & the camelbak filled with cold water – and set off down the trail. The trail challenges my sore ankle with a 150-foot ascension over loose, rocky terrain in the mile it takes to get to the overlook. I admit to Garfielding among the trees and boulders lining the trail. (Garfielding is the term we use to describe needing breaks along the trail – affectionately named after the out-of-shape cartoon cat).

“Isn’t this post supposed to be about being on time?” Yes, it is..

As the trail turned from natural surface to stairs, our vision filled with a breath-taking view from the overlook. We reached the overlook platform and I pulled out my Canon to snap some photos from this fantastic vantage point overlooking Georgia. The camera feels a little light and I flip on the switch. Nothing happens. The display doesn’t light up. It’s completely unresponsive and reality dawns on me that I left the battery plugged into the inverter in the car.

After a few snaps with my phone camera, we head back toward the parking lot because I’m outta here. After all the bullets I dodged to get  on top of this mountain with both of the boys in tow, complete with camera gear, and AAAGGHHH! Life happens.

I’m in a mood and high tailing it back down the trail. I’m not leaving this place without my photos. I reach in the car and snag the battery, load it into the camera and head back up the trail. Either the boys really enjoyed the trail or they know me well enough to realize that now is not the time to disagree. They happily jumped back on the trail in high spirits.

And, this is where I get to the moral of the story.

When we reach the overlook, for the second time, we walk out on the platform to witness a gorgeous storm rolling over the mountain in our direction. The sight of this huge dark cloud baring down on us was such a magnificent sight that it took me a moment to regain my senses and pull out the camera to do that thing I do. 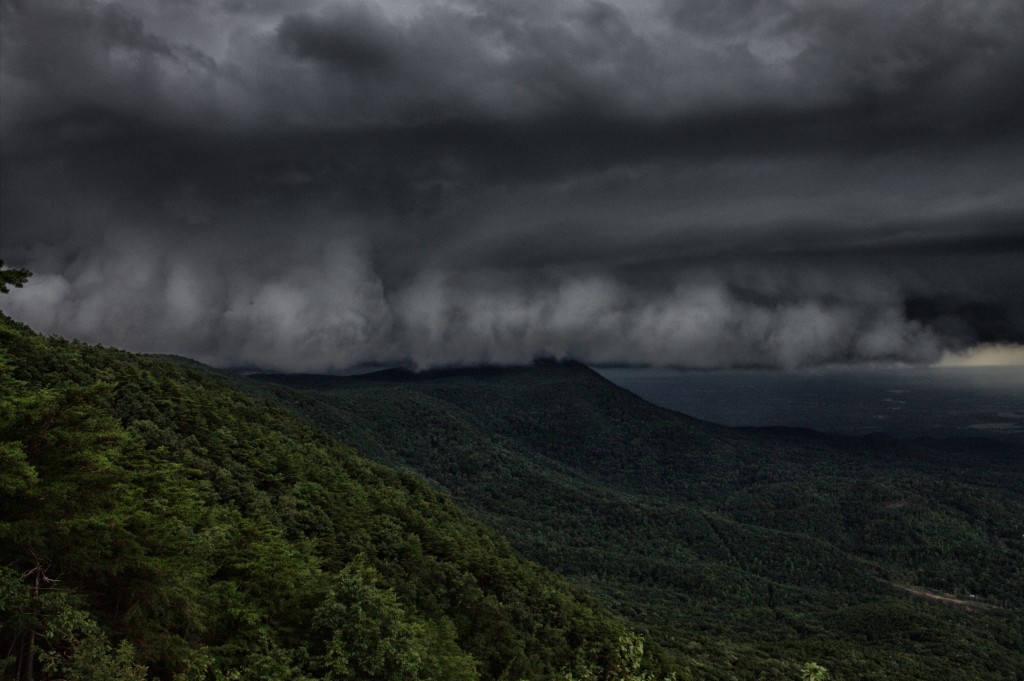