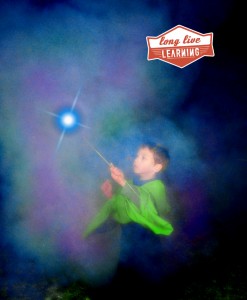 Our recent visit to Homeschool Day, at the Atlanta History Center, led to a great interest in the Salem Witchcraft Trials. During the event, we were given a page full of characteristics to identify witches, werewolves and people possessed by the devil. If we found any, we could bring them to court where they must defend themselves (in vain) and accept the fate handed to them. My son was turned in for being a werewolf. He made every attempt to calm the fears of the people and proclaim his innocence, but he was sentenced to be cured by exercising and died.

He had strong feelings about being accused of something he’s not, and being tried in such an unfair court whose evidence was nothing short of a random assortment of things that the townspeople didn’t like.

That was his introduction to the Salem Witchcraft Trials.

My son is highly progressive and scientific  in his beliefs and ideas about the world. So, it’s a far stretch for him to understand why people feared witches, believed in spells and fortune telling, and went as far as torturing and killing people accused of such things with minimal and/or absurd evidence.

I decided to help him better understand by taking him back to colonial times and I’m going to share my resources and ideas for activities. First thing is first though, we must immerse ourselves in the experience…… which calls for a clearly defined list of chores commonly assigned to Colonial children. My boys are now colonial children. LOL There are some jobs that don’t exist anymore, but if your kids think about it for a minute, I’m sure they can come up with something similar for a modern substitute.  Click the image below to view the full size printable, “Ye Olde Colonial Chore List.”

In addition to trying on some of these colonial responsibilities, we can make dipped candles and simple soap! Check out Long Live Learning’s Colonial Times Pinterest Board for an ever-growing list of crafts and activities from Colonial Times. 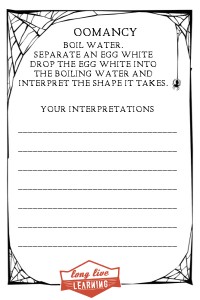 National Geographic has a short, easy to understand summary of The Salem Witch Trials. It examines the young girls’ fortune telling (which was forbidden by Puritans) as a cause of the accusations of witchcraft. The article states that the girls were dropping egg whites into water in order to reveal the faces of their future husbands. I suggest you check out this page of “The World’s Strangest Methods of Fortune Telling,” which includes interpreting egg whites dropped in water. It’s called, “Oomancy,” and here’s how you can do it. Click the “oomancy fortune telling card,” at right, to print it out and tell your fortune! You can also visit our pinterest board, “Salem Witch Trials,” for more fortune telling methods you can do at home like making an origami paper fortune teller.

I found this video, on TeachingHistory.org, that I think is awesome. Elizabeth Reis analyzes testimony from the Salem Witch Trials, looking at what both confessions and denials say about religious and social norms among the Massachusetts communities involved. In the first segment, she explains the religious beliefs and aspects that led to the trials.. I also think most of it is understandable for 10 & up.

Play our “Which is Witch?” Game and start a discussion about how we perceive things about other people because of what they look like may not be true. Print out the PDF below by clicking the little square to open in a new window.

Which is Witch? PDF

Check out PBS’s, “Secrets of the Undead,” and explore the idea that hallucinations caused by a fungus is the culprit for starting the accusations of The Salem Witchcraft Trials.

Some other ideas include visiting Discovery Education’s Salem Witch Trials page, printing a map of Salem Village and making a timeline of events.

Ruins to Rapids Full Moon Hike @ Sweetwater Creek State Park
Monday Oct 29 7 to 9pm
A flashlight and sturdy, closed-toe shoes are required. No children under 6 or dogs. Meet inside the Visitor Center. Register in advance. $6 plus $5 parking. 770-732-5871.