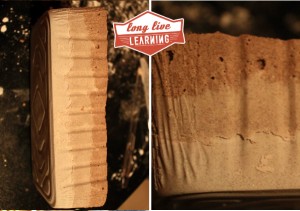 This is an easy gift to make for a rockhound or fossil hunter on your list!! My son recently purchased a $15 “Rock & Gems Dig” Kit from Smithsonian. It was lame and he was highly disappointed. Our local Rock & Mineral Club was having their annual show, a month before Christmas. So, we went! I snuck around and grabbed up some cool rocks, gems, & fossils and made him a “dig block,” he can enjoy. It’s really simple and inexpensive. I already had plaster of paris & sand laying around. My only expense, for this, were the rocks. I spent about $12 on rocks, gems & fossils. They sell $2 grab bags, at the door, and I added some things I thought he’d like to that. I included rocks, gems, fossils and an arrowhead (as evidence of humans). I thought having all the different stuff would be more fun and exciting than just the rocks. I included carnivore (shark) and herbivore (bison) teeth. I also kept a couple of those out for comparison when he finds them. 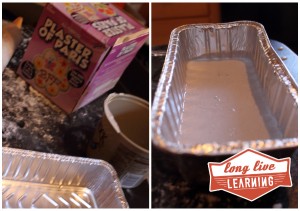 Materials for Dig Block:
Plaster of Paris / Throwaway Container for mixing / Mixing stick
Sand
Cinnamon
Shoebox Sized Container or foil pan as a mold
Objects to ‘hide’ in the block

Making the Dig Block:
For the mold, I used a small foil loaf pan. It worked great. At the end, the block slid right out of it.

Plaster / Sand Mixture
To avoid the mixture drying out, I only mixed up one layer at a time.
The recipe for one layer is:
1/2 cup plaster of paris
1/2-1 cup sand (go with your preference, it can make the mixture thicker.. start with 1/2 cup and add more for coloring and texture, but be careful about adding too much.)
1/2 cup water (you may have to add a bit more if you add more sand or plaster)
Cinnamon to color – I found some info on the web about paint or food coloring not working well with the plaster. So, rather than mess everything up.. I went with cinnamon. In the photo, our lightest colored layer contains the least amount of sand and cinnamon. The middle layer contains a bit more sand and some cinnamon. The top layer, I poured in a lot of cinnamon and did have to add a little bit more water. 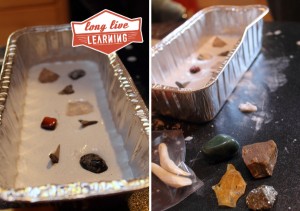 1. Pour a bottom layer. When the mixture has thickened a bit, press some of your objects into it. Wait a few more minutes to let it thicken up some more,.
2. Mix another layer of plaster/sand. Repeat step one.

Do this until you have reached the top. We added more and more cinnamon to mimic the colored layers of sedimentary rock. When you get to the top, don’t add anymore objects!

Tools to include:
– Ice Pick or wooden dowel with a pointed end: This becomes the chisel we use to dig at the rock.
– If you include loose sand, include a spoon as a small shovel.
– Small Hammer or Mallet: This is what you hit the chisel with to chip away small chunks of the rock
– Paintbrush: Include a paintbrush for brushing away sand & “rock” from the objects.
– Magnifying glass for studying close up!
-Print out of rock identification sheet

Now, for other activities.
Making Fossils!
There are a couple different kinds of fossils we can make.

Take one of the single-serving snack containers and mix in it two parts plaster of paris to one part water. Wait until it gets somewhat hardened & press an object partially into the mixture. Maybe use one of the objects from your dig, or a small toy, whatever. (When I was in school, we coated the object in vaseline to help it easily remove.) When the mixture hardens, remove the object and you have a mold fossil.

Cast Fossil – formed when a mold is filled in

Take a single-serving snack container and pour sand into it. Use an object, maybe a shell, or a large shark’s tooth, toy, whatever; to make an impression in the sand. Mix two parts plaster of paris to one part water and slowly pour it on the sand impression. When it hardens, you have a cast fossil.

You do this the same way as the cast fossil… but, instead of an object, use a larger container. Put sand in the bottom, then use your hand or foot to make an impression in the sand. Pour the plaster of paris mixture in the impression and you have a trace fossil of your own hand/foot! Cool for a paperweight or something.

The other kind of fossil is a True Form Fossil, which is an actual part of the animal. If your kit included shark’s teeth or something, you have a true form fossil.

Rock Identification “Field Guide”
Scroll to the bottom for a printable guide of some popular rocks & gems.

From Rockhounds.com, an image of the Rock Cycle

Use Rockhounds.com “Rock Key,” to help you identify rocks!

Displaying your collection!
We found a hanging curio display case, like the one below, at the thrift store and used it to display our collection. 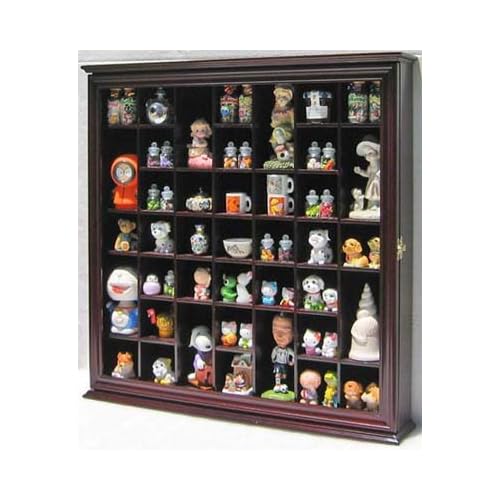